Reflecting on diversity at Playgrounds Con 2017 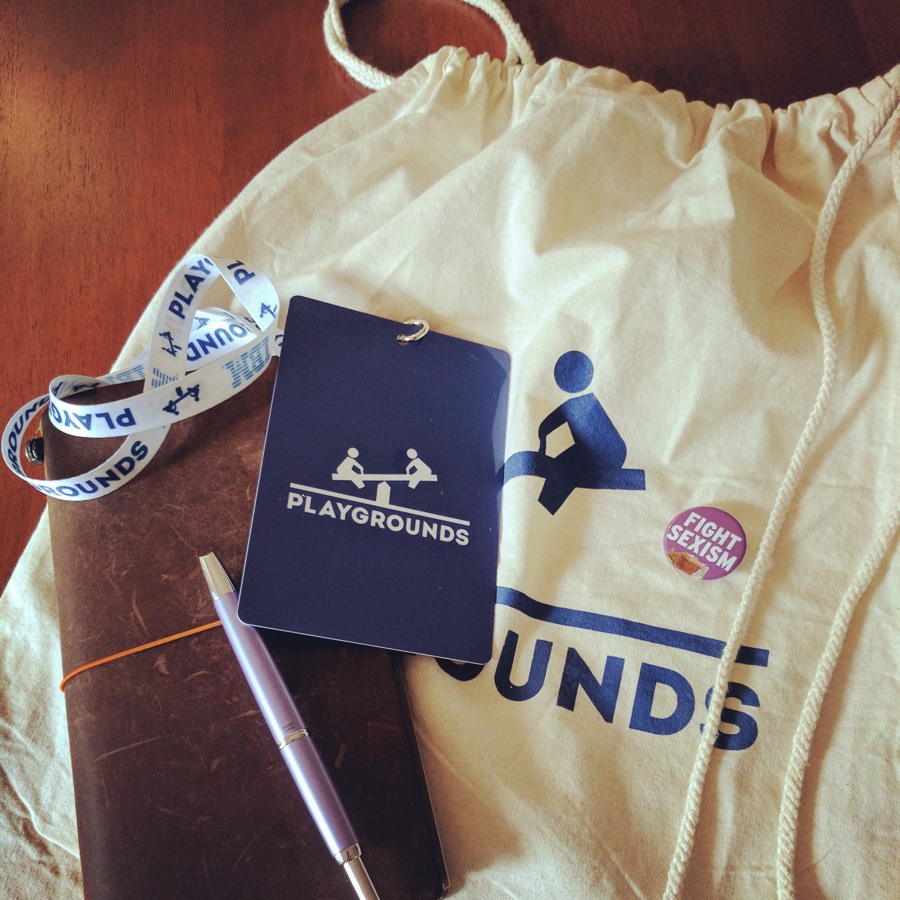 I recently attended my first ever conference, Playgrounds. It was quite a technical-focused conference about Swift and Apple development.

I noticed a bunch of good and bad things relating to diversity and inclusion at Playgrounds, and wanted to take some time to reflect on them and what we can learn as a community.

I was offered a diversity scholarship to attend Playgrounds, so I didn't have to buy a ticket. Without that, I wouldn't have been able to attend, as Hello Code isn't paying me a salary at all right now, and I only work part-time at RescueTime.

I'm very grateful for receiving the scholarship, and for being offered paid time off from RescueTime to attend.

Because I'd been offered a diversity scholarship, I was particularly curious about how diverse the audience would be overall. I didn't see a whole lot of diverse ethnicities represented in the audience, but I definitely saw more women than I've seen at most other tech events I've attended. Lots of the volunteers were also women, so it was nice to feel like part of a big group rather than a token woman in the crowd.

Unfortunately there weren't as many women on stage. It was nice to not see a line-up full of cis, white men, but women only made up 20% of the speakers, so I would've liked to have seen a bit more diversity here.

Diversity and inclusion were certainly on the mind of Playgrounds organiser Andyy Hope. The conference had a code of conduct, which was mentioned several times throughout, including clear explanations of how to report a breach or any other issue.

There was also a pre-conference event the night before the talks kicked off, which was a screening of the documentary CODE: Debugging the Gender Gap and a panel of discussion after. The documentary talks mainly about the issues of sexism, lack of diversity, and harassment in the tech community, while the panel explored more practical ideas for addressing these issues.

Having been primed by this event to notice and address sexism and discrimination, I was disappointed to see a few instances pop up on the first day of the conference.

Disappointed at subtle sexism in some talks at @playgroundscon. Shame to not see it called out after last night's event priming us to notice

When I mentioned this on Twitter, Andyy reached out to me immediately, discussed my concerns, and followed them up with day 2's speakers. I was impressed that Andyy was clearly so dedicated to addressing these issues and improving the conference to make it more inclusive. I felt like he took my concerns seriously, was willing to hear me out, and appreciated that I was willing to bring up these issues.

Having said that, I still feel it's important to address the particular issues I noticed at Playgrounds in a public way. While I don't want to call anyone out directly, I want to call out the behaviour I saw, and make it clear that it's not okay, and that it didn't go unnoticed. I believe having this discussion publicly is important for two reasons, since all of these events occurred during talks, rather than between attendees:

Diversity and inclusivity in tech are industry-wide, not just conference issues. We need to deal with them as a community.

Diversity and inclusion are not conference issues. They're community issues.

Finally, before getting into the specifics of what I noticed at Playgrounds, I want to preface them by saying that these are very minor issues. I'm not talking about overt sexism or direct harassment. I'm talking about subtle sexism and minor examples of perpetuating exclusionary stereotypes.

But minor mistakes need to be called out as much as major ones. We heard in the film CODE how women leave the tech industry due to death by a thousand cuts; that is, thanks to many, many minor issues that aren't taken seriously or dealt with appropriately, that finally build up to make minorities feel so uncomfortable in our community that they leave for good.

Although other conferences, tech events, and company cultures around the world are full of much worse issues than what I noticed at Playgrounds, if I don't speak up about these examples I'm saying they're okay, and they're not. If we say it's okay to be subtly sexist, we have to arbitrarily choose a point at which sexism becomes overt enough to not be okay. The same goes for all kinds of discrimination.

As a community, we can't accept some discrimination. We have to say no discrimination is okay, and call it out no matter how big or small. It's the only way we can become more inclusive and accepting as a group.

With that said, here are the specific examples I noticed at Playgrounds.

The most frustrating example was a misattribution of a quote by a woman to a man. The speaker in question obviously thought this quote was useful enough to include, so they played a video of a man quoting his female colleague. After the video ended, the Playgrounds speaker attributed the woman's quote to the man in the video who quoted her.

Quoting and attribution are always important and should be treated very carefully, but it's especially infuriating to see a quote by a minority misattributed to someone in the majority.

Having said that, I also noticed one speaker, Hector Matos, pick himself up after using the term "guys" to refer to the audience at Playgrounds, apologise, and choose a gender-neutral term to use instead. It takes guts to admit in front of a crowd of people that you made a mistake and you're willing to correct it. I was encouraged by Hector's example, and hope to see this happening more often in our community.

Props to @allonsykraken for picking himself up on gendered language in his @playgroundscon talk. It's important & makes a difference 👍

(As a side note, "guys" is a term that seems fairly contentious. While some people—men and women alike—don't feel it's necessary to adjust usage of this word, others feel it's inappropriate to use a term that technically refers to men for a group of people of any gender, regardless of the fact that general usage has developed it to be used that way. I try hard not to use it myself but due to its contentious nature I would never pull someone up for using it. There was a female speaker at Playgrounds who'd been on the panel after the CODE screening who used "guys" several times throughout her talk. However, I do feel it's worth calling out positively anyone who tries not to use the term "guys", as it shows an understanding and desire to address one's own behaviour to include others equally.)

As I said, these are not conference issues. These aren't examples of anything wrong with Playgrounds itself. They're issues in our community that we need to address as a community. Playgrounds is part of that, and I know Andyy is already thinking about ways to continue improving how diverse and inclusive Playgrounds is in the future. But the rest of us need to play our parts as well, if our community is ever going to become a welcoming place for everyone.

I find it helps to have concrete ways to help, so I've put together some ideas below. If you have other concrete ideas for what we can do as a community to improve our diversity please let me know. You can find me on Twitter at @BelleBCooper or via email at Belle at hellocode.co

Without change, we'll all continue to miss out. Even the cis, white men who get the most opportunities in tech now will suffer from an industry that's full of other people just like them.